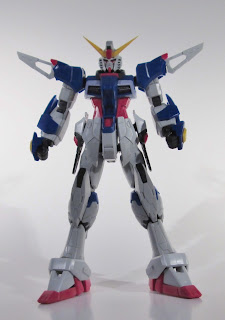 ZGMF-X42S Destiny. After about a day of furious snapping, the Destiny is finished. Also, I got some new lights for my photo booth so the lighting is a bit more even. I think I need one more to properly light the Gundam. The build was pretty straight forward, in the RG style, legs, torso, waist, arms, head in that order. Backpack and weapons came next and were much simpler to build than those of the Freedom. I do not miss putting on each wing individually

The Destiny doesn't seem to suffer from the same back-heavy issues that the Freedom had. It seems to be relatively poseable without a stand for ground poses. I'm starting to dislike RG hands as they seem to get more and more fragile with each new kit.

I'll be pane lining and stickering this kit with the included stickers. Except for maybe the stickers for the shield, I may end up painting those. I've still got the beam rifle and shield to build for this kit, but the backpack's weapons (anti-ship sword and gun) are complete along with the wings. 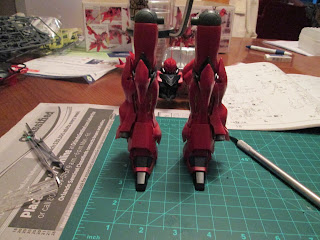 Continued to work on the Sinanju. The legs were a bit more complex than I was expecting. Coming from Real Grades, I wasn't used to building the inner frame of the parts as much as just having it. I forgot one of the inner frame parts on one of the legs, however its not visible once the armor is on. I'll just attach it later when I've removed the armor for painting.

I'm not sure when I'll actually be adding the color, or what color it will be. I know it probably won't be until I've bought an airbrush, however.
Read more »
Posted by BZWingZero at 12:00 PM No comments: 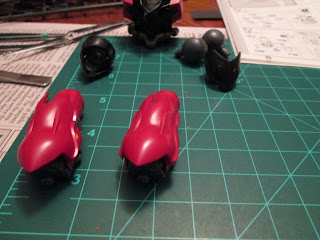 Continued to work on the Sinanju. Parts for the arms, shoulders and wrists. Quite an involved build but it made me fall in love with the Master Grade even more. As they say, once you go MG, you can never go back.
Read more »
Posted by BZWingZero at 10:29 PM No comments: