New kits and a new WIP 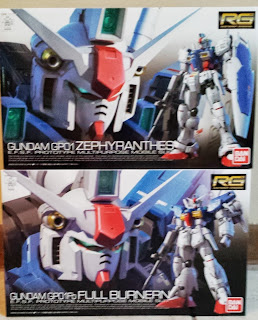 I picked up a few more kits thanks to the deals ModelGrade was running for /r/Reddit. Fast shipping and reasonable prices, I think a lot more of my kits will be coming from there in the future. I've been a huge fan of the RG line and decided to add a few more to my collection.

Since my last post I did pick up and build the MG GAT-X105 Strike ver. RM. Twas a fun build, however I don't really like the design of the Strike and I'm not sure why I've built it twice and am considering a 3rd (RG). I did take pictures but haven't had a chance to post them. They'll probably go up sometime this week. After the current build is finished and ready to be panel lined.

I'll probably be passing on the RG Strike Freedom that's coming out soon. Not really a fan of the design and I've already built the RG Freedom. Plus, I've got something else that will be filling my time along with the GP01 brothers above until the MG Proto Zero comes out. Read on to find out what... 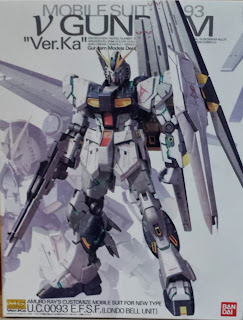 Once again, thanks to one of Model Grade's Reddit specials I've got this beast to work on. Its a kit that I've been lusting over for awhile and now its on my workbench.
If you're wondering why the plastic cement is out on my cutting mat its because I cracked the white piece while putting on one of the sides of the cockpit holder. Look closer:

Posted by BZWingZero at 8:11 PM